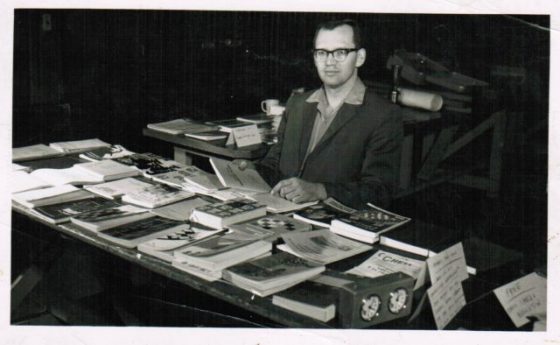 Here is a list of some chess players that have given some of their memories of James Schroeder. Click on the name to read the full remembrance.

Few American chess players have contributed in so many ways and for so long as James Schroeder.

Douglas Ayers (Jim’s good friend who helped him so much his last few years.):

He … would do anything for you, up to and including the shirt off his back.

Steven Frymer (Head of the Prison Committee of the US Chess Federation for several decades.):

He was the father of prison chess.

I knew him only thru his spicy writings, “Confidential Chess Lessons.”

Jim did come into money once when he inherited $40,000 from his sister, but Jim spent most of the money on donations to prison chess clubs, a charitable endeavor of Jim’s, which lasted several decades.

Suddenly JAMES SCHROEDER entered the room. “WELL MR. FISCHER, YOU HAVE DONE IT.”

Who made this epic life changing trip possible, arranged every single detail for the soon to travel the world chess fledgling? James Schroeder.

Almost every tournament I played in while a Junior he would find some excuse to “award” me a book.

[H]is typically blunt assessment of my play (“your attacking skills are woeful”) spurred me to play in a more aggressive style.

He could direct you to the nearest chess club, but if you relied on his guidance to get to the Capital Building, you’d both get lost.

He played a good game of ping-pong and, of course, gave advice. To me, it was like his chess advice: attack directly, hit through the ball.

His apartment was in an older building and was sparsely furnished with a small portable black and white TV with a coat hanger antenna. Chess books were piled all over the place.

The MCO 12 was in excellent shape but the Basic Chess Endings was a little beat up, so I asked Schroeder if he would cut me a deal since I was buying more than one book. He was aghast. He told me in no uncertain terms that this book was a classic, that it contained essential knowledge and that his price was reasonable considering the book’s value.

I took this National Master’s words to heart. I began playing the Blackmar-Diemer Gambit. I made more threats. I learned more. I won more.